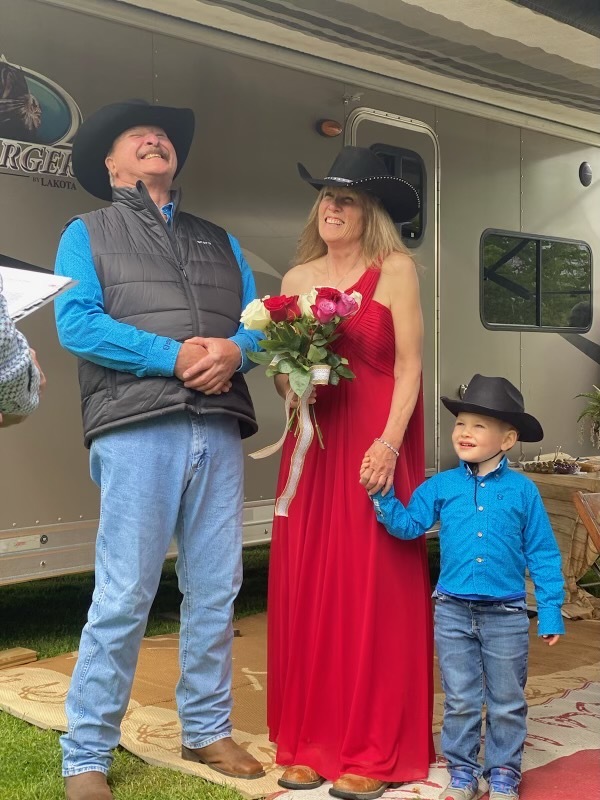 After fifteen wonderful years together, Jim Urbanksi and Colleen Kelly have finally and officially tied the knot!

Jim, who is also the founder and current owner of Uncle Jimmy’s Horse Treats, and Colleen are serious equine enthusiasts, both being longtime horse owners.

When they first met, they spent most of their time in the saddle chasing cattle. After a few years, however, they became involved in Cowboy Mounted Shooting. (article continues below images)

“We are shooting more each year and will continue to do so as long as our bodies hold out,” explained Jim. With that in mind, both Jim and Colleen now compete at major Cowboy Mounted Shooting events throughout the United States, with Colleen recently moving up to a level 5 (out of 6 possible levels).

The wedding ceremony took place at Jim and Colleen’s Pennsylvania farm. Ron Kiko, who is also a Cowboy Mounted Shooting enthusiast, officiated the ceremony. According to Jim, “When you see my horse trailer at a shoot, you will see Ron’s trailer right beside, with our awnings down together. That’s where the party starts at night, along with Ron and my lounge chairs, where we have logged a lot of nap time.”

According to Jim, the couple’s honeymoon plans include “…traveling around the country riding horses and shooting balloons. That’s what we live for. Last year I bought a new horse which is now working out really well, and Colleen just bought a back-up horse, which is still in training. “

To learn more about Uncle Jimmy’s Horse Treats, or about Jim Urbanksi, please go to www.uncle-jimmys.com.

Currently Only Shipping to United States

We use cookies to ensure that we give you the best experience on our website. If you continue to use this site we will assume that you are happy with it.Yes, I Accept