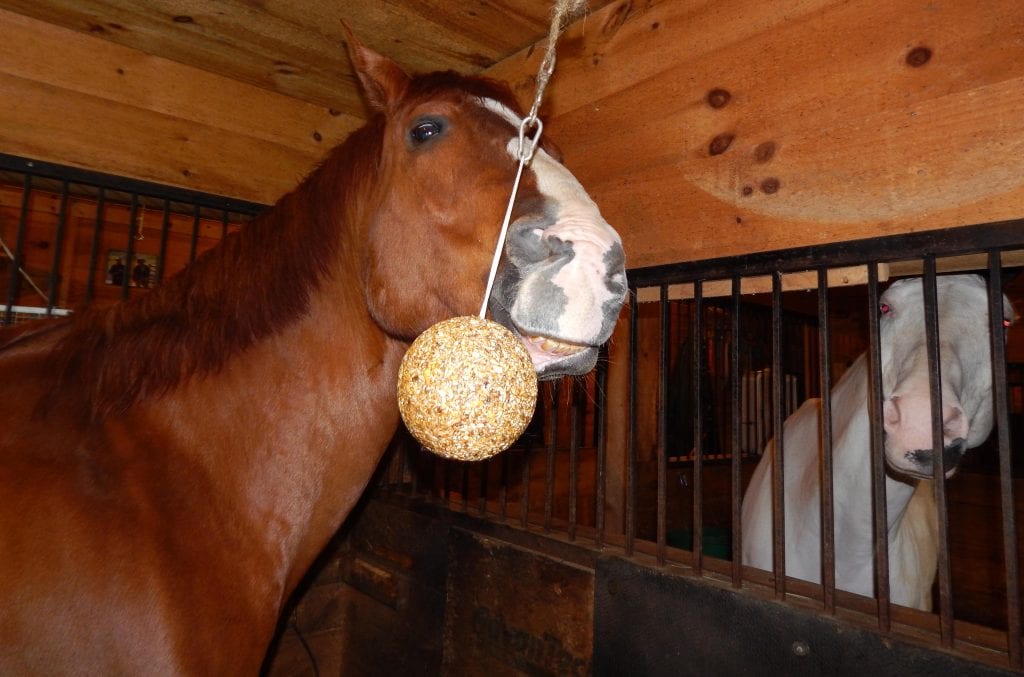 As you know, I have always had a passion for horses and finally, after years of riding everyone else’s, I bought my own horse, which turned into my own horses, plural.  You all know how that goes.  Well, I bought my first boredom buster and hung it in one of the stalls.  That horse wouldn’t even look at it. I then gave it to another one of my horses who took one bite and popped it in half. I was really worried about her choking but luckily she didn’t.

Soon after that, while I was flying from Pittsburgh to L.A., I kept thinking about what the perfect boredom buster would be.  By the time I arrived back home I had an idea about what I wanted this product to be like.  It would have to be nutritious, tasty and hard enough to last more than a minute with a horse gnawing on it.  So the formula was a ball of grain, which was going to be the same grain that I give my own horses. That way it would be packed with vitamins and minerals and contain the all-natural flavoring that is used in my grain.

The next step was for the ball to have its own hanger. After some thinking, I decided that the best hanger for the ball would be simple: just an embedded rope through the center of the ball (like soap on a rope, for those of us who are old enough to remember that!).

The next question was what I should use as a binder, to hold the grain together in a ball shape.  My first thought was Super Glue. But then I realized that wasn’t going to work (but, hey, it’s the idea that counts right?). Thankfully, now enters my daughter, Christy.  While driving down the road, I get a call from Christy who says three words; corn syrup solid.  She explained that if you add water to this stuff and heat it on the stove, it will harden like candy.  It did and I made my first Hangin’ Ball prototype!

Note: At the time I was developing the Hangin’ Ball, Christy was going to college. She ended up being a clinical pharmacist.  While in school, she met David, her husband-to-be.  David was in school studying to be an attorney.  After graduation, David ended up as the legal advisor for Uncle Jimmy’s Brand Products LLC.  So Uncle Jimmy’s is now a total family business!

Currently Only Shipping to United States

We use cookies to ensure that we give you the best experience on our website. If you continue to use this site we will assume that you are happy with it.Yes, I Accept